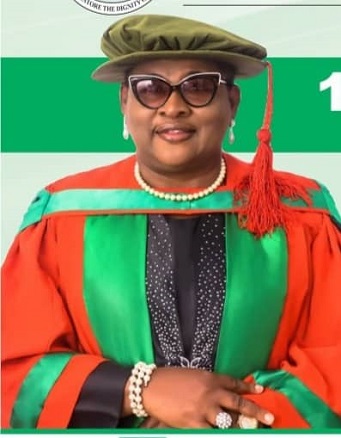 The 22nd of March, 1962 was the day that the heavens resolved to add to the stock of rare species of human beings on earth. That day heralded the birth of a baby girl with uncommon mission and cerebral endowments to family of Chief Maurice and Lolo Roseline Nnorom. She is the second child of her mother but the third from a polygamous setting. That baby girl is Professor Edith Ogonnaya Nwosu for whom we have today gathered to listen to her inaugural lecture.

Professor Edith Nwosu’s father who represented the old Okigwe Division in the Federal House of Representatives during the First Republic ensured that Edith and her siblings had good education and inculcated in his children the virtues of boldness and tenacity. Edith’s educational pedigree started at St. Johns’ Primary School, Abakaliki. She later proceeded to Abakaliki High School (then Presbyterian College - PRESCO) from where she obtained her West African School Certificate. Before her foray into the legal profession she had obtained an HND (Upper Credit) in Co-operative Economics and Management from the Institute of Management and Technology (IMT) Enugu in 1981 and a PGDE (Credit) in Education from the former Anambra State University of Technology in 1987.

Professor Edith Ogonnaya Nwosu obtained her LL.B degree in 1992 with (Second Class Honours, Upper Divison) from the University of Nigeria, Nsukka. At Nigerian Law School, Lagos she obtained her BL. With a First Class in 1993. She was also a triple prize woman at the Law School – haven won the first prizes in Criminal Procedure and in Company Law and Commercial Practice. In addition, she obtained the second prize for the Best Overall Performance at the Law School.   Subsequently, she bagged her LL.M and Ph.D degrees in 1997 and 2009 respectively from the University of Nigeria Nsukka.

Earlier in 1994, based on her sterling performances at the undergraduate and Bar exams she was recruited as an Assistant Lecturer in the Faculty of Law, University of Nigeria, Enugu Campus. She rose through the ranks and in 2011 she was appointed a Professor in the University of Nigeria. Nsukka. Over the years she has been teaching Company Law and Law of Energy and Natural Resources at both the undergraduate and postgraduate levels. In many of her publications she has admirably demonstrated her in depth appreciation of the subjects and their dyadic interplay.

Professor Edith Ogonnaya Nwosu has served either as member or Chairman of numerous Faculty, Senate and Council Committees in the University of Nigeria. She was Acting Head, Department of Commercial of and Property Law from 2008-2013; Associate Dean Student Affairs Department, Enugu Campus from 2014-2018; and University Orator from 2011-2014. Owing to her meticulousness, dedicated organizational abilities and editorial prowess she was appointed Assistant Editor of a foremost Law Journal – the Nigerian Juridical Review, which is the flagship Journal of the Faculty of Law, University of Nigeria, Enugu Campus. She served in that capacity from 1999-2004 and later as Secretary of the Editorial Committee from 2004-2013. From 2015-20 she served as the General Editor of that Journal.

Furthermore, Professor Nwosu has served as member Senate Time-table Committee, 1997-2004; member UNN Strategic Planning Committee from 2014-2015. Till date she has been a member, Council Committee on Budget and IGR; member, Senate Ceremonials Committee; and, member Joint Council/Senate Committee on Endowment.

Furthermore, Professor Edith Nwosu is certificated for several structured trainings. She possesses Certificates in Management of Higher Education Institutions from Galilee International Management Institute, Nahalal, Galilee, Israel and from the Global Academy of Teaching Excellence (GATE), Wright State University, Dayton, Ohio, United States of America. She is also a Fellow of the Nigerian Institute of Chartered Arbitrators. Indeed, in 2020 she emerged the third best overall winner of the Hon. Justice Kayode’s Price for the third position for the Award Writing Assessment for Fellows of the Nigerian Institute of Chartered Arbitrators.

Professor Nwosu is widely published in reputable national and international journals and she has as well attended and facilitated many national and international Conferences. In pursuance of her avidity for research in corporate securities and governance she recently led a research team that won the prestigious TETFund National Research Grant to investigate the impacts of changes in Securities Laws on Capital Market Development in Nigeria from 1999 to 2019.

Apart from her academic calling, her evangelistic duties even more define her personality and strong beliefs. A devout Christian who unequivocally believes in the sovereignty of our Lord and Saviour Jesus Christ and that she is nothing and can be nothing except in Christ. She holds the view that her vocation as a teacher provides her with fertile and limitless opportunities to evangelize. On that pedestal she has effectively ministered and led many to Christ. As an academic evangelist her watchword is encapsulated in Ecclesiastes 9:10 which says: “Whatever your hand finds to do, do it with your might.”  The unction of God upon her live has earned her a place as Faculty member, Haggai Institute, a faith-based organization for leadership training based in Maui, Hawaii, United States of America from 2007 to date.

Professor Edith Ogonnaya Nwosu is very happily married to Mr Victor Emenike Nwosu, another rare human being, a shrewd business man with a large heart and for whom the word “impossible” exists only in the dictionary. Their union is blessed with four children who are doing exploits in here in Nigeria, the United States of America and Canada.